The French Film Festival is back for this year at GSC cinemas (Midvalley, 1-Utama & Pavilion) from 7 May to 17 May 2009.

Director: Claude Berri
Genre: Romantic comedy
Cast : Audrey Tautou, Guillaume Canet
R/T : 97 minutes
Year: 2007
Synopsis: Camille is an office cleaning woman. When she falls sick, his neighbour Philibert, a young aristocrat, insists that she stays with him and his flatmate Franck, a tender cook with a genuine love for his frail grandmother Paulette, to take care of her. Even though Camille and Franck clash, the trio manage to live together and to learn from each other.
Awards: 3 wins and 3 nominations.
1 César Award in 2008: Most Promising Actor (Laurent Stocker).
Cabourg Romantic Film Festival 2007: Best Actor (Guillaume Canet).
European Film Awards 2008: 1 nomination (Best Film).
2. “Saint Cyr”

Director : Patricia Mazuy
Genre : Period movie
Cast : Isabelle Huppert, Jean-Pierre Kalfon, Morgane Moré.
R/T : 119 minutes
Year: 2000
Synopsis: Madame de Maintenon rises from humble beginnings to become a courtesan to the royal court and eventually marries King Louis XIV. With the king's indulgence, Maintenon opens a special school for girls, seeking to educate young ladies of distinguished parentage but limited financial means. With the coaching of Maintenon and her staff, the girls learn to speak French with a linguist's precision, in addition to studying philosophy and history. However, when two of Maintenon's charges, Anne and Lucie, recite material in class that Madame deems inappropriate, it begins a war of wills between the headmistress and her students.
Awards: 3 wins and 7 nominations.
Cannes Film Festival 2000 (Award of the Youth), 1 César Award in 2000 (Best Costume Design).
3. “400 Blows” / “Les 400 Coups”

Director: François Truffaut
Genre : Social
Cast: Jean-Pierre Léaud, Claire Maurier, Albert Rémy
R/T : 99 minutes
Year: 1959
Synopsis: A young Parisian boy, Antoine Doinel, neglected by his derelict parents, skips school, sneaks into movies, runs away from home, steals things, and tries (disastrously) to return them. Like most kids, he gets into more trouble for things he thinks are right than for his actual trespasses. Unlike most kids, he gets whacked with the big stick. He inhabits a Paris of dingy flats, seedy arcades, abandoned factories, and workaday streets, a city that seems big and full of possibilities only to a child's eye.
Awards: Nominated for Oscar (Best Writing, Story and Screenplay, 1960).
Another 6 wins and 3 nominations, including: Cannes Film Festival 1959 (Best Director), BAFTA Awards 1961 (Best Film), New York Film Critics Circle Award 1959 (Best Foreign Language Film).
4. “Crime is our Business” / “Le Crime est notre affaire”

Director: Pascal Thomas
Genre : Comedy
Cast : Catherine Frot, André Dussollier, Chiara Mastroianni
R/T: 109 minutes
Year: 2008
Synopsis: The latest adventures of Belisaire and Prudence Bersford. The characters are enjoying peaceful days in their castle but Prudence is bored. She longs for an event that would add some excitement to their lives. The day an old aunt witnesses a murder, Prudence perks up and sets out on the trail of the killer.
Awards: 2 nominations at the César Awards 2009 (French equivalent of the Oscars): Best Actress (Catherine Frot) and Best Writing – Adaptation.
5. “Rivals” / “Les Liens du sang”

Director: Jacques Maillot
Genre: Thriller
Cast: Guillaume Canet, François Cluzet, Clothilde Hesme
R/T: 106 minutes
Year: 2008
Synopsis: Set in Lyon, in the late 1970s. François is a dedicated police inspector. His brother Gabriel is a crook who has just finished serving a prison sentence for murder. Their reunion is not easy but both men want to draw a line under the past.
6. “Séraphine”

Synopsis: Based on the life of French painter Séraphine de Senlis. In 1914, Wilhelm Uhde, a famous German art collector, rents an apartment in the town of Senlis, forty kilometers away from Paris, in order to write and to take a rest from the hectic life he has been living in the capital. The cleaning lady is a rather rough-and-ready forty-year-old woman who is the laughing stock of others. One day, Wilhelm who has been invited by his landlady, notices a small painting lying about in her living room. He is stunned to learn that the artist is no other than Séraphine.
Awards: 10 wins and 3 nominations.
7 wins at the César Awards 2009, including Best Film, Best Actress, Best Cinematography and Best Writing – Original.
Cairo International Film Festival 2008: 1 win (Best Actress, Yolande Moreau).
The films selected are quite interesting even though the selections are only a few and some of them are not new especially 400 Blows and Saint Cyr.
Well, I truly like Audrey Tautou and Isabelle Huppert as they are both great actors with superb charisma. Audrey Tautou (DaVinci Code, Priceless & Amelie) is starring on a new biopic film on Coco Chanel this year (oui, the woman who created the fabulous Chanel). The film is called Coco Avant Chanel. Can't wait to watch this movie. Hopefully she is as good as Marion Cotillard in the biopic film of Edith Piaf in La Vie en Rose. 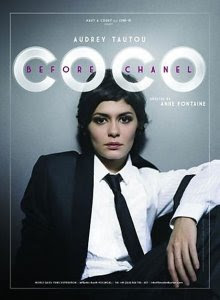 I'll be definitely catching a couple of the films, especially Hunting & Gathering and Saint Cyr.
Anybody interested to join me? Let me know.
Alors, j'adore les films de Français.
Posted by Northern Sky at 1:34 PM