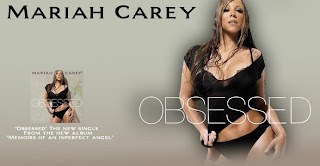 First came the emancipation, then came energy and power, and now comes MEMOIRS OF AN IMPERFECT ANGEL, the new album by international superstar Mariah Carey, scheduled to arrive on August 25th. The first new single pick from MEMOIRS is "Obsessed," which blasts out to radio today, Tuesday, June 16th. The video for "Obsessed" will be directed by Brett Ratner. "Obsessed" was written and produced by Mariah, The-Dream and Tricky Stewart, who are responsible for the majority of tracks on the new album. MEMOIRS was executive-produced by Antonio "L.A." Reid.

The song, Obsessed is targeting Eminem, who recently started a beef with Carey and her husband Nick Cannon with the Relapse song "Bagpipes From Baghdad. "I was like, why are you so obsessed with me?" Carey asks before the song even begins.In "Bagpipes," Eminem rapped, "Mariah, what ever happened to us, why did we have to break up… Nick Cannon better back the f**k up. I'm not playing, I want her back, you punk." Mariah's response? "You're delusional, boy, you're losing your mind," Carey sings over choppy synths, with a dash of Auto-Tune dabbed on her voice. "It must be weed, it must be the E… Why are you so obsessed with me? Lying that you're sexing me." Carey adds some more barbs, like "Telling the world how much you miss me, but we never were so why you trippin' " and provoking the rapper with "You're a mom & pop, I'm a corporation. I'm a press conference, you're a conversation." The biting mid-tempo track is already more musically and lyrically engrossing than E=MC2's singles.

Get ready for the summer of MC!